ITRI Named a Top 100 Global Innovator for the Sixth Time 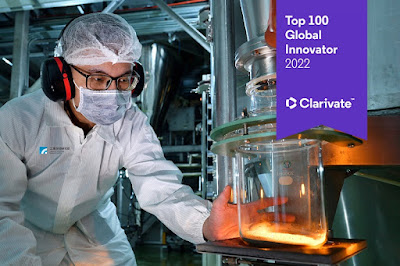 ITRI has been named a Top 100 Global Innovator by Clarivate for the sixth time and fifth consecutive year.​

Hsinchu—The Industrial Technology Research Institute (ITRI) has been named a Top 100 Global Innovator™ for the sixth time and fifth consecutive year, making it the most awarded research institution ever in Asia. The annual list from Clarivate™, a global leader in providing trusted information and insights to accelerate the pace of innovation, recognizes organizations with the capabilities, consistency and creativity that delivers new value and ingenuity for the world. ITRI, the French Alternative Energies and Atomic Energy Commission (CEA), and National Centre for Scientific Research (CNRS) are the only three government-sponsored research organizations to make the 2022 list.

In recent years, ITRI has been working on maximizing the impact of intellectual property (IP), identifying untapped niche opportunities, and creating new value for R&D results. “We are actively facilitating connections between the capital and technology markets to build an IP Bank and national-level patent pool for Taiwan. So far, we have supported more than 50 startups and small & medium enterprises to enhance technological innovation and acquire financing,” added Dr. Liu.

“ITRI is one of the three national state-funded research organizations that make the list this year. We congratulate on its inclusion for the 6th time, 5 years in a row. ITRI truly exemplifies above-the-bar excellence in innovation, with its novel ideas and international ambition. We hope ITRI can continue to drive industrial development and deploy its many R&D results into the economy,” said Ed White, Chief Analyst and Vice President of IP and Innovation Research, Clarivate.

According to Clarivate, the methodology for the Top 100 Global Innovators model of excellence calculation has been refreshed for 2022. This year’s report introduced a new twin track approach to evaluation: The first track identifies organizations that passed the qualification criteria based on volume of inventive activity; while the second track evaluated all inventions in the Derwent World Patents Index™, scoring them on influence, success, globalization, and technical distinctiveness.

The Top 100 program uses informatic techniques targeting innovation excellence to compare 50 millions of ideas, across thousands of baselines, through billions of calculations, to discover the 100 innovators at the pinnacle. This year is the 11th edition of the Clarivate Top 100 Global Innovators report, which includes honorees from 12 countries and regions. Besides ITRI, renowned companies such as 3M, Intel, Qualcomm, and TSMC are also on the list.
較新的文章 較舊的文章 首頁