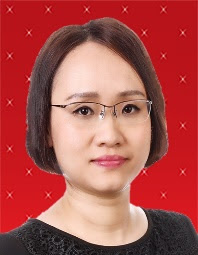 After the surprising 25bps rate hike by the central bank on March 17, there are many discussions about the impact of higher interest rates on the domestic economy. A key question is whether higher rates will trigger a correction in the property market and deleveraging in the household sector. Property prices and household debt growth both picked up notably

in the last couple of years, amid an ultra-loose monetary environment after the Covid crisis. As interest rates start to go up, there are naturally concerns about the adverse impact on household debt servicing capabilities. In this regard, we think the impact will remain limited for the 2022-23 period. We consider five reasons:

1) The pace of central bank rate hikes is likely to be gradual in the next 24 months. After the 25bps hike last week, the central bank governor Yang Chin-long explained that the move was to unwind the one-off 25bps rate cut delivered during the Covid pandemic. As the benchmark discount rate has returned to the pre-pandemic level of 1.375%, we expect it to rise at a modest pace of 12.5bps per quarter in the rest of this year and 2023 – the default pace of rate hikes during the past tightening periods. The discount rate will rise a cumulative 87.5bps to reach 2.25% by end-2023, within the estimated 2-3% Taylor rule-implied neutral rate.

2) Credit rule tightening is likely to remain gradual. To cool the property market and curb household debt growth, the central bank has introduced four rounds of regulatory tightening on banks’ mortgage loans since end-2020. The loan-to-value ratio for the third home purchases, for instance, has been lowered progressively to 40% from 60%. There is room for the central bank to broaden the LTV regulation to second home loans in designated areas, as they did during the 2010-14 tightening. But the central bank refrained from doing so when announcing to raise rates at last week’s meeting, indicating the intention to avoid aggressive tightening measures that induce severe pressure on home borrowers.

3) Market liquidity conditions remain ample. Liquidity conditions in the banking system remain favorable, as evidenced by banks’ record low loan-to-deposit ratio of 74%, excess savings in the private sector and a strong current account surplus. Coupled with intense competition in the crowded banking sector, banks may still have motivations to offer preferential lending rates to expand their loan books. Hence, actual interest costs for home borrowers may not rise sharply in the near term. 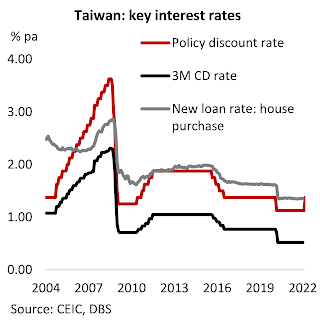 4) Household savings buffer is strong. Taiwan’s household debt rose to a record high in 2020, equivalent to 92% of GDP and 148% of households’ disposable incomes. Nonetheless, the asset position of households has also strengthened in the past several years. The ratio between household debt and assets fell to an all-time low of 16% in 2020. Meanwhile, the financial assets held by households are predominantly liquid assets like currency and deposits (nearly 40%). Although households’ ability to repay debt from cash flows has deteriorated, they still have a substantial savings buffer to withstand the increase in debt repayment burdens. 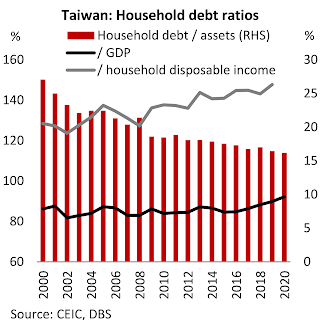 5) Empirical studies show that asset price correction and deleveraging do not occur immediately at the early stage of interest rate hike cycles. Instead, they tend to lag after a significant rise in rates. In the past three decades, Taiwan experienced an enormous property and stock market bubble in the late-1980s and a mini-bubble in the credit card market in the mid-2000s. In the first case, property prices peaked and started to decline in 1991 – two years after the central bank raised the policy rate by as much as 325bps in 1989. In the second case, a mini-crisis in the credit card market broke out in 2006 – two years after the central bank kickstarted tightening and raised the policy rate by about 100bps. 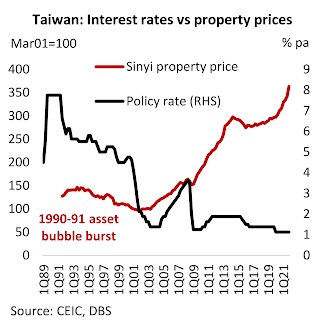 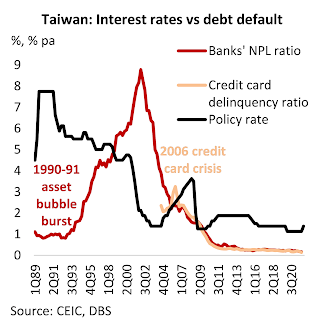 Globally, interest rates are on the rise. Developed Market central banks such as the US Federal Reserve and the Bank of England have started normalizing monetary policies. Markets and businesses worry higher global rates may curb consumer demand for durable goods and slow global trade growth. Taiwan has benefited from a favorable upcycle in the worldwide tech sector for two consecutive years. Naturally, there will be questions as the year advances. For now, the short-term outlook looks intact.

Leading indicators suggest that Taiwan’s electronics demand remains strong in the near term. Export orders for electronic components accelerated to 21.5% YoY in Jan-Feb, notably higher than 14.4% in 4Q21. The gap between export orders and exports of electronic components stayed well above the trend levels, suggesting that chip demand continued to outstrip supply by a wide margin. The first quarter, which is traditionally a weak season for the electronics sector, is not weak this year. 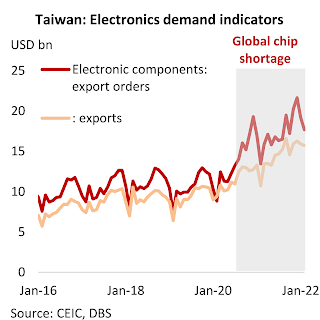 Meanwhile, historical Fed tightening cycles often coincided with an upturn rather than a downturn in the tech sector. The Fed rate hikes during 1994-1995 and 1999-2000 coincided with the Dot-com bubble in the late-1990s. Strong global semiconductor sales from the emergence of new technologies like Artificial Intelligence and the Internet of Things accompanied the last hike cycle in 2015-18. When the Fed decided to start tightening in the past, it also assumed a sustained economic recovery. 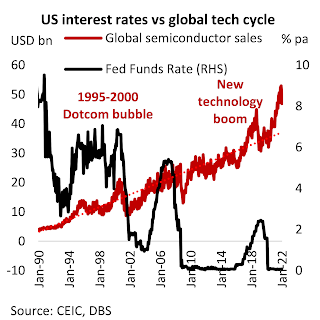 In our view, a more worrying wild card for Taiwan's short-term growth outlook is the Omicron situation and reopening path. The government has started to allow foreign business travelers to apply to enter Taiwan and shortened the quarantine period for all incomers to 10 days, effective from March 7. Social distancing rules have also been relaxed further from March 1, including the mask-wearing rules for outdoor and indoor sports activities, and eating and drinking on trains and domestic flights. The initial step of reopening has resulted in a modest rebound in Covid infection cases, to about 100 per day since March 19.

If a larger-scale Omicron outbreak were to happen in the coming weeks, the economic recovery would be interrupted in 2Q but the impact should be modest and temporary. The Covid vaccination campaign has gathered pace in Taiwan. The percentage of the total population receiving vaccine booster shots reached 48% as of March 22, similar to levels in Singapore and South Korea in January (when Omicron started to spread to Asia) and far higher than those in Hong Kong SAR. Hence, the fallout from any Omicron outbreak in Taiwan should be better than Hong Kong SAR and closer to Singapore and South Korea, with no severe pressure on the domestic medical system from a sharp increase in infection cases. The government may retighten restriction measures but is likely to avoid lockdowns. Private consumption expenditures may decline for 1-2 months, but trade and supply chains of critical industries will remain largely unscathed.

If the Omicron situation remains stable for another 1-2 months, expect a fuller reopening this summer and a relatively smooth growth path. Inferring the current pace of inoculation, the coverage rate of vaccine booster doses in Taiwan will likely reach 60% by end-April and 70% by end-May. Barring unexpected shocks such as new contagious variants, Taiwan may take a bolder step towards reopening this summer. Better vaccine protections should help mitigate the reopening risks and ensure a sustained economic recovery under this scenario. 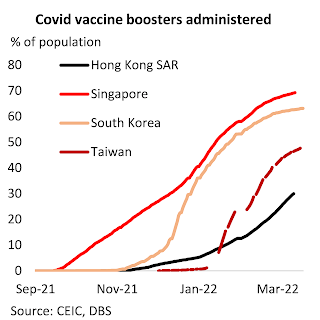 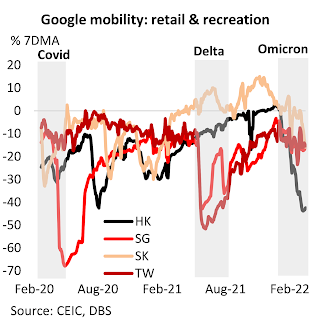 As elaborated in this note and the previous one last week, monetary policy tightening, Omicron, Ukraine crisis and oil price increase have added uncertainties to Taiwan’s growth recovery prospect. Still, overall impacts should remain limited and manageable in the short term.

As of February, key indicators such as exports and industrial production have continued to surprise on the upside, suggesting first quarter GDP growth would remain strong at ~4% YoY.

Without the downside risks from the above economic and geopolitical challenges, full-year growth will exceed 4% to hit 4.5%. After considering these new uncertainties, we have adjusted our 2022 GDP growth forecast to 3.8% compared to 2.8% previously. 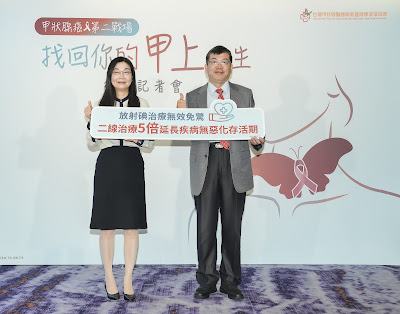