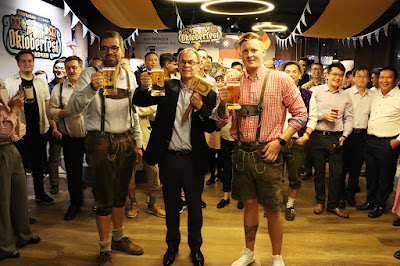 TAIPEI, Taiwan –October is the traditional month for German beer festivals, including the famous Oktoberfest in Munich, which resumed with a record of 5.7 million participants worldwide this year. The German Trade Office Taipei (GTO) has brought this tradition to Taipei since 2016. This year, the GTO celebrates the Oktoberfest 2022 X GTO German Business Days in cooperation with Buckskin beer on October 14th and October 15th at the Buckskin Beerhouse Taipei. Following the traditional German ritual of the "Barrel Opening Ceremony" in Taipei, Mr. Axel Limberg, Chief Representative and Executive Director of the GTO, also solemnly announced to all walks of life that "the Oktoberfest is back in Taipei!"

The annual Oktoberfest is an excellent opportunity for the German Trade Office to introduce this unique German culture to Taiwan. “We are happy to see this Oktoberfest appreciated by the Taiwanese–German Business Community and to celebrate with a whole house on these two days,” stated Mr. Limberg. As one of the most important annual events for the Taiwanese and German business community, the event brought together representatives of Taiwanese and German companies and their business partners to promote bilateral economic and trade cooperation in a joyful atmosphere.

"We are delighted to announce that the Oktoberfest is back in Taipei. It will always be a good way to keep business relations through social and cultural events like the Oktoberfest," stated Mr. Limberg during his opening remarks. He further emphasized, " Since the Oktoberfest is one of the most well-known German traditions, I also believe that today's Oktoberfest in Taipei will not only be a highlight of cultural exchange but also an important event for the further development of the German-Taiwanese economic relations."

Following the traditional “Tapping the Beer Keg” ceremony together with the German brewmaster Jonas Krebs, the first beers were shared with the guests of honor. The Oktoberfest featured live music by the German band Die Praktikanten/The Interns, authentic German food, and Germany-style beer brewed by Buckskin.