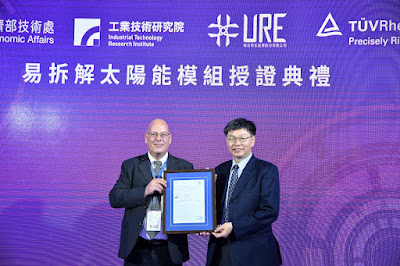 The module could be fully recycled, and the recovered materials such as silicon and glass can be reused, saving the decommissioned PV modules from being broken up or degraded. ITRI’s R&D team estimated that the recycle value of the retired PV modules could significantly rise, roughly from US$18 million to US$74 million per 1 GW, creating a new circular economy model for the solar industry.

“ITRI adopts a circular design to reconstruct conventional PV modules,” stated ITRI Executive Vice President Alex Y.M. Peng. The redesign of the module started with a new encapsulant and took into consideration the product life cycle of the backplane, cells, and bracket of a PV module. Dr. Peng stressed that this innovation allows the complete recycling of solar cells and glass plates. The high purity of the recovered silicon wafers greatly increases the material value, reducing the need for new raw materials. With this technology, carbon emissions of the PV products are estimated to be reduced by 50% or more. “This can strengthen the competitiveness of the solar energy industry to reach the net zero goals by 2050,” he said.

URE Chairman and CSO Dr. Sam Hong said that the latest encapsulation material technology has led to the creation of this easy-dismantled module. It offers the PV industry a ticket to the sustainable circular economy. In addition to tackling the difficulty encountered in recycling, the Easy-dismantled Solar Panel Module also minimizes manpower costs. Supported by MOEA’s Department of Industrial Technology, this module design has been tested and proved viable by the Proof of Concept (PoC) conducted by the French Alternative Energies and Atomic Energy Commission (CEA). The material system and structural design of the Easy-dismantled Solar Panel Module have been optimized based on different environmental conditions.

ITRI has been committed to its 2030 Technology Strategy & Roadmap, and the development of green energy technology is an integral part of the Sustainable Environment applications of that initiative. The Easy-dismantled Solar Panel Module has already been tested in Keelung Island, Penghu, and southern France. In addition to passing IEC 61215 and IEC 61730 tests and receiving TÜV Rheinland’s certification, this technology is expected to obtain Taiwan’s Voluntary Product Certification (VPC) in the first quarter of 2023.