TECO Group Huang Yu Ren: perfectly prepared and on standby at any time facing the battle for the management rights 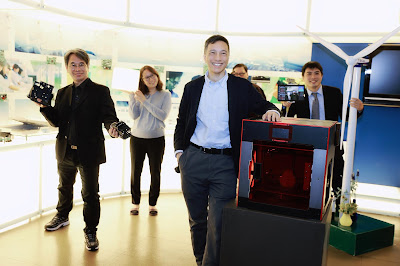 The battle for the management rights of TECO Group ignited by PJ Group will come to the fore in advance resulted by the coming TECO Group’s shareholder meeting at the end of May. TECO Group’s low-key third generation successor Huang Yu Ren, currently the Chairman of Creative Sensor Inc. (CSI), TECO Image Systems Co., Ltd. (TIS), and Lien Chang Electronic Enterprise Co., Ltd. (LIEN CHANG), said that he would not be the prince but rather be the general. That is, he would not receive achievements from others but rely on his own to fight for the rights of the employees and shareholders of TECO and win the battle. He also said that he would “be prepared and played diverse roles,” in the hope that he would receive more recognition and support of TECO from shareholders.

In order to defeat PJ Group's fight for the management power of TECO, TECO and Walsin Technology Corp. (WTC) reached a cooperation agreement on the issuance of new shares and exchange of shares in last November. Although PJ Group’s shares of TECO were reduced to 25.7% after this move, it still remained the single largest shareholder of TECO. Conversely, as PJ Group kept pushing forward, it resulted in the unity of the shareholders of the five major families of TECO.

Huang Bozhi, the honorary chairman of Taiwan Association of Machinery Industry (TAMI), resigned as director of TECO on December 31 last year. His post was replaced by his eldest son, Huang Li Tsong, the Chairman of Yingyi International Investment. It was widely guessed that Huang Bozhi has reached an agreement with Huang Maoxiong, the chairman of the TECO Group, that Huang Maoxiong would resign as TECO director after re-election of the board members in the TECO shareholders meeting this year; TECO Group would also launch a new personnel plan so that the company would have a new business outlook, facing the challenges of a whole new era.

As chairman of three companies: CSI, TIS and LIEN CHANG, Huang Yu Ren has been in charge of the information and electronics business group of TECO Group for years. About these three companies: CSI has been producing industrial and consumer image sensors, which accounted for 40% global market share. After the outbreak of the epidemic, there was also a significant increase in the demand for the consumer personal photocopiers which kept up the market share. CSI has been developing far-infrared thermal imaging sensor modules and systems, while TIS has been producing the axis drive of SCANNER.

Huang Yu Ren stated that through adopting 3D printing technology, TIS has changed its former molding production model, design and reduced the weight of products. Therefore, he required his employees not to focus on volume, as TIS’ goal was to serve as the world's smallest mass production manufacturer. The current monthly orders are 200, while the goal for this year is 100 per month and for next year, 50 per month. If the business of TIS is profitable, and customers are satisfied, the possibility of mass production is not excluded in the future.

During the interview, Huang Yu Ren gave the example that at the highest time, he took part in three stage plays in the extracurricular activities of his freshman year at Keiyi University in Japan. At that time, there were 80 people in the club; 6 people were allowed to act on stage, while the remaining 74 people were the key to the success of the whole play. He learned from this experience that he would never know when the opportunity would come; one must always be ready. “A prince relies on things given by others, while, given the opportunity, a general relies on himself to conquer the world and build up military exploits,” he said. Therefore, he desires to be a general first to protect the rights of the employees and shareholders of TECO. Besides, whether he is the leading role or not, he is more than ready and able to play as diverse roles as possible.

Huang Yu Ren also revealed that before the TECO shareholder meeting last year, he and the chairperson of TECO, Sophia Chiu, had once visited their major shareholder, the future successor of PJ Group, Peter Lin; at the same time sought internal and external support. Although the proposal brought up by the board of directors of TECO passed at the shareholders meeting last year, not only did PJ Group vote against it, but other investors also vote for objection. Huang Yu Ren knew that only those who appreciated the company would criticize. Therefore, he was not afraid of being scolded. For this year’s shareholder meeting of board member re-election, no matter what the result is, it will be different from the past, and one has to adapt, he said. The future does not belong to the biggest or the strongest; only the fittest could survive.

Huang Yu Ren pointed out that whether it was TECO, CSI, or TIS, the company must be innovative. Companies profit either through opportunity trend, innovative capability or management flexibility. Since his grandfather Lin Heyin co-founded the company with the other four major families, TECO has always been a company of group leadership. The downside of it is slow decision making. One misses the opportunity when everyone has an opinion. In his aspect, to reduce loss, waste and mistakes, TECO has to rely on innovation and management flexibilities in the future. That is, besides cost down management in the company level, TECO has to develop innovative capabilities to increase corporate profits.

Huang said that before the outbreak of the epidemic and U.S-China trade war, there were many factories and sales offices of TECO subsidiary companies located in mainland China. They did not take side during the trade war. However, there is a great gap between the current and the expected performance of TECO's electric vehicle business. Regarding TECO's heavy-duty electric motor business, they cannot expect a product will sell for 10 years as in the past but to accelerate the pace of development. Besides TECO introducing talents of heavy electronics, motors, and electronic control fields, and its affiliated company TIS developing 3D printing technologies, the Group also hope to introduce high-tech talents into the traditional industry. As for the deployment of solar power plants, in addition to the initial installation on the roofs of the factories of TECO and its affiliated companies, they are also being developed in other fields.