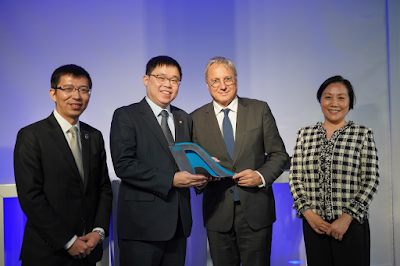 (from left) CFM International Regional General Manager Sales China
Aaron     Yang, STARLUX Chairman K.W. Chang,
Airbus Chief Commercial Officer Christian Scherer and
GECAS Executive Vice President & Regional Manager Commercial,
Greater China Li Liu.
Hamburg, October, 2019 — The Taiwan startup airline STARLUX Airlines took delivery of its first A321neo today in Hamburg, Germany. The delivery ceremony took place at the Airbus Delivery Centre and was witnessed by STARLUX Chairman K.W. Chang, Airbus Chief Commercial Officer Christian Scherer and
GECAS Executive Vice President & Regional Manager Commercial, Greater China, Li Liu. The registration number of STARLUX’s first A321neo B-58201 has now officially been put onto the aircraft. K.W Chang will personally fly this brand new aircraft back to Taiwan. It is expected to arrive at the Taiwan Taoyuan International Airport at 11:30 a.m. on October 28, making it the first A321neo introduced into Taiwan.
A pilot and an aircraft maintenance technician himself, K.W. Chang participated personally in all the required checks before the delivery — from ground inspection to test flight — to ensure the performance and safety of STARLUX’s first aircraft.
“This exciting day has finally come. From the examination and test flight over the past few days, I am once again very confident that STARLUX has made the right choice in selecting the A321neo as the first member of our fleet. I am sure that with the outstanding performance and the cabin configuration, it can provide the most safe and cozy journey to our passengers, giving rise to new vitality to the airline industry in Taiwan,” Chang said.
One of the features of STARLUX’s A321neo is the Airbus Cabin Flex (ACF) configuration. By applying modifications to the fuselage, ACF enables more flexible cabin configurations, allowing for more seats while still providing a roomy cabin. Together with the new-generation CFM LEAP-1A engine, the aircraft can deliver per-seat fuel improvements of 20%. STARLUX’s new A321neo has 188 seats, including eight in business class and 180 in economy class. Each seat in business class is equipped with a 15.6-inch 1080p inflight entertainment system screen and can transform into an 82-inch fully flat bed. The seat pitch is 63 inch, which gives each passenger spacious leg room. Although economy seats take up most of the cabin, coach passengers can stretch out with a generous 31-inches of leg room. Every seat in economy is equipped with a personal entertainment system featuring a 10.1-inch 720p screen, which is the first on narrow-body aircraft in Taiwan. Moreover, Wi-Fi service is provided in both classes.
“Congratulations to STARLUX Airlines on their first ever aircraft delivery! We are thrilled that STARLUX has selected the most efficient A321neo to start operations in Asia. Our best seller will bring the highest levels of efficiency to the airline’s operations with no compromise on comfort. And with the A350 joining the fleet in 2021, STARLUX will benefit from commonality by operating single aisle and widebody aircraft together offering a seamless experience for both passengers and crew. Thank you STARLUX for aligning these two stars - the A321neo and the A350." said Christian Scherer, Airbus Chief Commercial Officer.
The ten A321neos STARLUX will introduce are on lease from GECAS. Two more will be delivered before the airline officially launches in January next year. The first three A321neos will serve the inaugural routes to Macau, Da Nang and Penang.“We are privileged to support the launch of Starlux Airlines’ operations with new technology aircraft,” explains Li Liu, GECAS’ EVP & Regional Manager Commercial, Greater China. “As the airline’s first A321neo, it will showcase Starlux Airlines’ luxury travel experience, while providing the fuel efficiency and technology enhancements of CFM’s LEAP-1A engines.”
STARLUX will wrap up delivery of its ten A321neos in 2021[RS1] , expanding its flight network to more major cities within Asia, aiming at providing convenient services in regional tourist and transfer markets with its high flight frequency. The 17 A350 XWBs that were ordered in March this year will begin to be delivered in the second half of 2021. STARLUX will then continue adding destinations to North America and Europe, expanding its safe and exquisite service to the whole world.

[RS1]We always recommend not to give details about delivery plan. You might want to be more generic and only mention “in 2021”.
較新的文章 較舊的文章 首頁 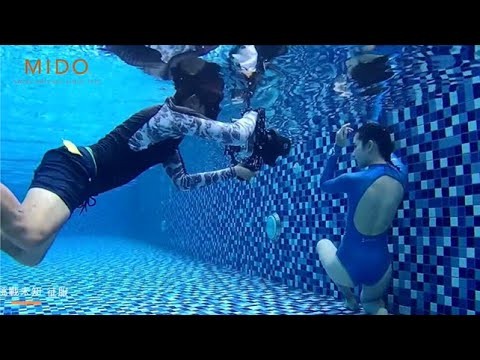